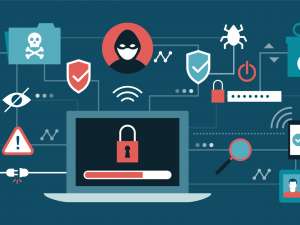 For years we have written about malware, viruses and phishing on the Panda Security blog – but there are other ways to break into a computer. Here are three of the weirdest techniques we’ve heard of – and they really do work.

There are many malware variants that infect computers, monitoring every button you press on your keyboard; they are called keyloggers. Some enterprising security researchers have discovered that with certain wireless keyboards they are able to bypass the computer completely.

According to their experiments, they were able to scan the radio signals passing between the keyboard and the computer – from 50 metres away. When they analysed the data it was found that many keyboards were sending that information in plain text – including passwords and payment details.

The good news is that most wireless keyboards now use Bluetooth which automatically encrypts keypress data making it almost impossible to intercept or read. However, if you are using an older 2.4Ghz wireless keyboard (they usually need a small dongle plugged into a USB port to work), you may need to consider replacing it.

When hackers break into a computer, they typically use the internet to send stolen data back to themselves. To protect very sensitive information, companies use ‘air gapped’ computers that are not connected to the internet at all, making it much harder for cybercriminals to access.

Cybersecurity experts at Ben-Gurion University in Israel have found a way to bridge the air gap using the cooling fans built into virtually every computer and laptop. By infecting an air gapped computer with malware, they are able to adjust the speed of the fans, changing the noise they make, almost like (tuneless) musical notes.

These ‘notes’ are then assigned to a letter of the alphabet; by adjusting fan speeds, the malware can transmit stolen data (like passwords) as sounds to another nearby device that is connected to the internet. This method is very slow and unlikely to affect home users (very few of us use air gapped computers) – but it really does work.

You’re probably already aware that your smartphone and smart speakers are constantly listening in your house – and that’s a calculated risk. But your computer could be listening too – and not just the microphone.

Hackers have discovered that they can use the hard drive built into your computer to do a similar job. Inside the disk, parts are finely balanced to minimise the damaging effect of vibrations; the disk stops reading and writing during a vibration. These pauses may last fractions of a second, but the more intense the vibration, the longer the pause.

Using this knowledge, hackers have been able to use the hard drive as a microphone. They can recreate the sounds, like voices, that cause the pauses. The decoded sounds can then be sent back to the hacker over the internet.

There is some good news though – hard disk drives are becoming less and less common in newer computers. They are being replaced by faster SSDs which have no moving parts and are not affected by audio vibrations.

All three of these attacks are incredibly rare and unlikely to affect home users. You are still at far greater risk of malware, phishing – so you should prepare accordingly. Download a free trial of Panda Dome antivirus today to protect yourself.